‘During the last week of Lent, as nobody dreamed of eating an egg, eggs in abundance graced the Easter breakfast table, and on Easter Monday the little men and women under thirteen years of age assembled in some dry sheltery ditch or quarry-hole, bringing their supplies of griddle-cakes, eggs, butter, dry sticks or turf, and egg-spoons fashioned by themselves of ash or oak boughs, or any suitable chance splinters that had come in their way. A roaring fire was soon made, the eggs roasted, and the social meal proceeded.

The seven weeks of Lent were cheered by conversations concerning this Easter jollification, and allusions to its past enjoyment did not cease or flag from Easter Tuesday till Whitsuntide.’

Banks of the Boro 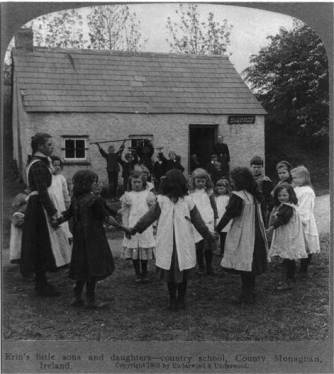 ‘The feast of St Gregory the Great, 12th of March, was formerly observed as a holiday, and one of the festivity in all the rural schools in the baronies of Forth and Baigy (the Strongbonian Colony), in the county of Wexford.

The manner was this: the children, for some days previous, brought contributions, according to the means and liberality of their parents, consisting of money, bread, butter, cream, &c., and delivered them to the teacher.

On the morning of the joyous day, the children repaired to the school-house in holiday dress, where the teacher had everything prepared for the festivity, the simplest temple of learning decorated with the richest flowers within his means of obtaining, and the presence of two or more kind-hearted females to do the honours and duties of the tea-table to the happy juveniles. A “king” and a “queen” were nominated, who, of course, took the seat of honour,and the proud and busy teacher was everywhere all attention to his little pupils.

The day passed off in hilarity and innocent enjoyment, and the competitive system of free offerings left, generally, something pleasing to tell for some days in the pockets and closet of the teacher. This custom prevailed until after the commencement of the present century.’

‘I was talking the other day to an elderly  woman whose memory is full of old tales. Our conversation turned to the subject of the new moon, and she gave me this charm to find out who one’s future husband would be.

“If you want to see whom you will marry, miss, you must go out of the house in the first quarter of the new moon (Hallows Eve is the best, but the moon must be in its first quarter, if not you will see nothing). And you must see it for the first time. When you get a sight of it kneel down, and with a black-handled knife lift a sod from under your right knee and from under the toe of your right foot repeating:

Happy may I be;

Whoever is my true love

This night may I see.’

Then repeat the Lords prayer, lift a sod of earth, and with the earth you took from under your right knee and foot, hide it somewhere outside the house till you are ready to go to bed, then bring it inside.

You must not speak to a living soul once the earth brought into the house. Then put the earth into the right-foot stocking, and put that under your head. But be sure you talk to no one till morning.

A lady my mother knew did this and told nobody till afterwards, but she dreamt of the gentleman she married, though at the time she did not know him and had never set eyes on him. Well, my mother that she did it too at the same time as the lady I told you of.

And my mother dreamt that she went to the kitchen, and what did she see but a tall, dark young man sitting by the fire. She asked him what was he doing there, and when he would not go away, she tried to push him away with the poker, but he would not go for her. She was a young girl then, and it was many years after that she first saw my father. He could only have been about nine or ten years old when she dreamt about him, for my mother was eight year older nor him. He asked her to marry him many times, but she said he was too young for her. At last he ran away with her and she had to take him”’

‘St. Patrick was a great favourite with the Lord, and He sent His angel to him. to ask what things he desired most to be granted to him. On which the Saint made seven requests, among others, that no Outlander should ever rule over Ireland; that he, Patrick, should alone judge the Irish at the last day, even as the twelve who were deputed to judge
Israel ; and that every Thursday and Saturday twelve souls of the Irish people should be freed from the pains of hell.’