‘In Waterford, some years ago, the lower classes had a species of amusement, we believe peculiar to them; it was practiced on Ash-Wednesday, and was called “drawing the log.”

It was instituted as a penitential exercise to the bachelors and maidens who permitted Lent to arrive without “joining in the holy bands.” The log was a large piece of timber, to which a long rope was attached; it was drawn through the streets of the city, followed by a crowd of men and boys of the lowest grade armed with bludgeons, shouting and hollowing “Come draw the log, come draw the log; bachelors and maidens come draw the log.” The party had generally a piper, who squeezed from his bags the most noted of the nationalist airs; and it was no small part of the frolic to see the poor minstrel upset in the mire by the jolting of the unwieldy piece of timber over the rugged stones with which the streets were paved. The most scandalous scenes of cruelty often occurred; young men and young women often being forced from their homes, tied to “the log,” and dragged through the city.

The custom has, of late years, been, very properly, discontinued.’

‘In the parish of Modeligo, on the right bank of the Finisk, there may be found a remarkable specimen of the many holy wells of Ireland.

The name “well” is really deceptive : for the water is merely rainwater, and does not derive its existence from any spring, but is simply contained in a bath-shaped receptacle in a piece of limestone jutting up from the surface of the land. The dimensions of the well are about 4 feet long, by 3 feet broad, and 2 feet deep. I have called it bath-shaped, as it is an oval in appearance, and seems to be an unusually large bullaun, or a natural cavity in the rock. There is generally about six inches of water in it, and a legend asserts the existence of an inscribed cross and an inscription on the bottom. I have seen the cross myself, but it seems to be merely an accidental mark on the stone.

On the 14th day of August, the water is removed from the basin, and a fresh supply put in, by a man who lives close by; and the following day a pattern used to take place in the olden times. People may still be seen to congregate on the aforesaid date, and they invariably hang mementoes, in the shape of rags or other objects, on the ancient hawthorn bush that grows beside the well.

Tradition asserts that this well formerly existed some distance from its present position, and that a trooper of Cromwell’s led his blind horse, in mockery, around it, in order to find out and test the miraculous powers of the place. The horse was cured, but the soldier became blind, and the following day the well had taken up its present position. The place is known to the natives as the tobar beannuighte, and is marked on the 0. S. as ” Lady Well.”‘.

Journal of the Royal Society  of Antiquities Ireland, 1911 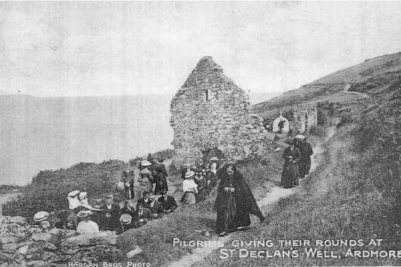 Mr & Mrs S.C. Hall, 1840; ‘The 24th of July is the patron day of Saint Declan, whom the Roman Calendar states to have flourished prior to the appearances of Patrick. He is said to have landed at Ardmore and to have there preached Christianity where he also, and in one night, built the famous tower and the adjoining church. The grave in which he is supposed to be buried and a singular mass rock on the sea-shore near the church are objects of peculiar veneration. This rock is believed to have floated over from Rome with the vestments of the saint, a bell for this tower and a lighted candle for the celebration of mass.

Though now a miserable village containing no house above the rank of cabin save that of the rector, there was a time when Ardmore was classed among the high places of Ireland. It was anciently an episcopal see erected by St Declan in the infancy of the Irish Church and before the arrival of St Patrick. St Declan, it is said, was a native to Ireland who travelled to Rome and returned to teach his countrymen in the year 402. The ruins of two churches which, from their architecture, must be of the Saint’s era, are in the immediate neighbourhood, and one of them, which had being used for service until very recently, is close to the famous round tower.’

Although Mr and Mrs S.C. Hall fail to provide information on the patron at Ardmore, Thomas Crofton Croker lets us know  that it was a popular site of pilgrimage in the early decades of the nineteenth  century. In his Researches in the South of Ireland, published  in 1826 – less than twenty years before the Hall’s account,  Croker comments that on Saint Declan’s Day, ‘vast numbers of the country people flock to Ardmore for the purposes of penance and prayer.’

‘In the counties of Kilkenny and Waterford, it was customary for the neighbours to go from house to house, light their pipes at the mornings fire, smoke a blast, and pass out, extinguishing them as they crossed the threshold.

We learn that, about seventy years ago, it was customary for the people in the same locality to assemble from different baronies and parishes, in order to try their strength and agility by kicking towards their respective houses a sort of monster foot-ball, prepared with thread or wool, and seven feet in circumference. To whichever side it is carried the luck of the other is believed to be transferred.