‘Lough Derg is in the centre of a lake in the wild and gloomy mountains of Donegal, and can only be approached by boat. The property in which it lies belongs to the Leslies of Glasslough. They have leased the ferry of the island to certain persons, who were contracted to pay them two hundred a year. I think it was in the year 1796, that a boat filled with ‘pilgrims’, as they are called, was lost, on its way across to the lake, owing to the drunkenness of the boatmen.

My father’s anecdote, or rather legend, went on to state that there was a holy priest in the boat who, when it sank with its freight, deliberately walked on the waters of the lake until he reached the island in perfect safety. I recollect observing to my father when he told me this legend: ‘It is strange that if he had the power of walking upon the water, he had not the power of saving the boat and all that were in it.’ He paused and looked at me, but said nothing.’

Pilgrimages to Lough Derg traditionally, as well as latterly, began in late May or early June, and continued until the Feast of the Assumption, 15 of August.

For many centuries Station Island has been referred to as Saint Patrick’s Purgatory, a name that was adopted from a cave on the island. The cave itself received the name through a legend, were Saint Patrick prayed to God for assistance in converting the pagan Irish, and God, answering his prayer, showed Patrick a cave which led to purgatory, where the horrors of hell could be viewed by pilgrims. The cave remained accessible to pilgrims who visited the island up until 1632, in which year the cave was closed by order of the Lord Lieutenant of Ireland.

The Lough Derg Pilgrimage remains one of Ireland’s most popular as well as ancient pilgrimage sites,  with accounts of pilgrimages to the island date back to the twelfth century, with oral accounts bringing the site back to the fifth century. Shane Leslie bequeathed the site to the Bishop of Clougher in 1960.

‘This year, 1885, we have had very severe weather the first days of April, and to account for this one of the natives state they are borrowed from March, and are called “Borrowing Days.”

In all mountainous districts here as elsewhere in Ireland March is the severest month for cattle: “an old cow on the 31st March began to curse and swear at April, tossing her tail in the air, and saying to the devil, I pitch you – you are gone and April has come, and now I will have grass. March, however, was too much for her, and he borrowed three days from April, during which time he made such bad weather the old cow died.’

Charles McGlinchey, Ballyliffin, recounting a tradition of his youth in the 1860s; 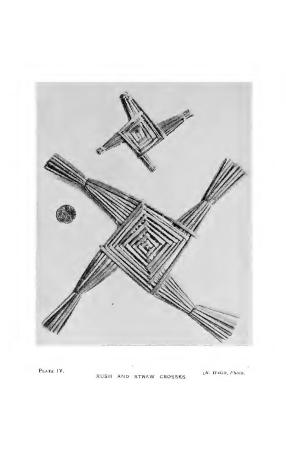 ‘Brigid’s Eve was the night for making crosses. Before the people of the house sat down to supper, a girl belonging to the family went out to bring in the rushes. If there was a girl by the name of Brigid in the house she got the privilege. She knocked on the door and the one inside said:

Take the head off the rushes,

Go on your knees,

And let St Brigid in.

That was the night my father always said the prayer “Bail na gcúig n-arán.The blessing of the five loaves”.

After we took our supper,all the grown-up ones about the house made the rush-crosses. A cross was made for the kitchen and for above the beds and for all the outhouses. The old people always left a rag of cloth outside on a bush that night till morning. It had the blessing of St Brigid and was used for cures, and against dangers of any kind, like the fever, or lightning, or fire, or drowning. It was called the ‘Bratóg Bhríde’.’

The last of a Name

‘In the south and west of Ireland marriages amongst the peasantry, with rare exceptions, take place during Shrove-tide.* Many of the people think it would not be lucky to be married at any other time of the year; consequently the priest always, when it was possible, visited the island during Shrove for the purpose of solemnizing any weddings which had been arranged. It, however, sometimes happened that the weather was so stormy for weeks together that no boat could approach the island, so it had been arranged that, when this occurred, the engaged couples should at an appointed hour assemble on the east shore of the island, while the priest, standing on the shore of the mainland opposite to them, read the marriage ceremony across the water. As soon as the storm abated he went to the island and did whatever more was necessary to render the marriages valid in the eye of the law and of the Church.

I cannot vouch for the truth of this, though I heard it from a very trustworthy man. He said the young people were not considered really married till after the visit of the priest; but “that they liked to be, at all events, partly married before Shrove was over.”‘

Seventy Years of Life in Ireland, 1893

*Traditionally the period between Christmas and Shrove Tuesday was known as Shrove-tide throughout Ireland. Generally it was the most popular time to get married, as the Catholic Church refused to sanctify marriages during Lent and Advent, both of which were times of abstinence and devotion, while at other seasons the people were generally too busy with farm-work or fishing to contemplate marriage.